The Simple Moving Average (SMA) indicator is the average price over a lookback window.

The SMA is used to smooth price data and can be used to help determine the direction of a trend. If the SMA is moving up then the trend is moving up and vice-versa.

You can also calculate more than one SMA and use the points where the SMAs cross as another entry signal.

The Excel formula for calculating the Simple Moving Average is:

The input parameters required are:

The output columns are:

"Calculate the SMA with a 5 day lookback window"

In this example you can see the price/date data in columns A and B respectively. The SMA formula is in cell D2 and references the price (A2:A100) and date (B2:B100) ranges as well as the 5 period lookback: 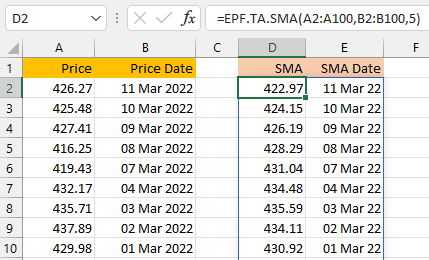